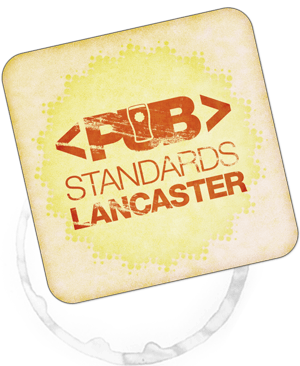 The second Thursday of every month, 6:00pm onwards.

Periodically, the fourth Thursday of the month, 6:00pm onwards.

Pub Standards Lancaster is a monthly meetup of developers, designers, founders and people-who-like-to-build-stuff in central Pennsylvania. Established in Lancaster by Court Ewing in 2013, it has been running continuously ever since. It was initially founded in London and other cities around 2005.

Who is it for?

This is the post-conference drink-up, without the conference

Tellus360 on the first block of East King. We meet on the second floor at the community table. If the weather is great we'll migrate up to the roof deck.

The mid-Pub Standards non-Pub Standards Pub Standards. For the more hardcore, Substandards takes place on the fourth Thursday of any month when someone feels like organizing it. The rules are that, instead of having a number (like regular Pub Standards) it must have a name (such as Substandards Jeff) and must always be in a different pub. Follow @PubStandardsLnc for location details.